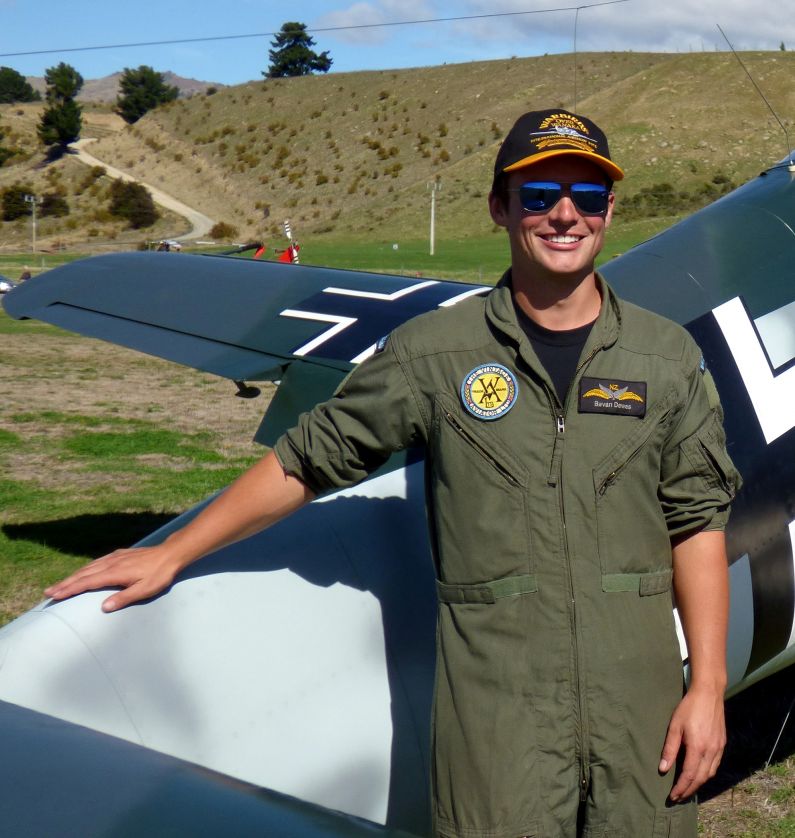 Twenty-seven year old Bevan’s earliest memories of aviation were as a toddler watching top dressing aircraft work on his parents’ farm near Masterton.  He got his first ride in such an aircraft when he was seven or eight.

Attending the local Wings Over Wairarapa Airshow further entrenched his love of historic aircraft and in particular Warbirds.  At the tender age of 18 Bevan took his first major step towards building his own aircraft collection.

“I was working on my Commercial Pilots Licence when the opportunity came up to buy a 50% share in a locally based DHC-1 Chipmunk.”  Bevan jumped at the chance and just 18 months later the other owner decided to sell his share and Bevan became the outright owner.

Bevan has a strong attachment to the aircraft.  “I’ve had the ‘Chippie’ for nine years now and it has opened many doors for me including getting me into display flying.  A major step forward was when I flew my first aerobatic display at the internationally-renowned Warbirds Over Wanaka Airshow in 2014 when I was just 20 years old.”

Early last year Bevan was approached by a friend who asked whether he knew of anyone who might be interested in a Harvard project.  “I asked him to send some photos and a bit of info and promised to ask around.  But when I read up about the aircraft I decided to pursue it for myself.  It was a very complete ex-RNZAF aircraft which hadn’t flown since 1958.”

Bevan had Harvard 1044 moved to Callum Smith’s Twenty24 Ltd hangar at Wanaka Airport for a full restoration to airworthy condition.  “It was bit of a gamble buying the aircraft but the restoration has been going well and we hope to have it flying later this year,” says Bevan.

Owning Warbird aircraft is expensive and Bevan admits he has had to make a lot of sacrifices to make his dream come true.  “I spent a lot of my late teens and early 20s working hard and saving every dollar to go towards my aircraft.”  When he’s not flying or working on his aircraft Bevan and his brother operate a Beekeeping business in the Wairarapa.

To the future and Bevan says his aim is to own and operate his own collection of Warbirds and try to tell a bit of the story of the RNZAF and the process from being an ‘ab initio’ pilot in the Tiger Moth through to the Harvard and then into a fighter like the Kittyhawk or Mustang.

In 2019 Bevan was awarded a $5,000 Warbirds Over Wanaka Flying Scholarship which he used to get a type rating in Doug Brooker’s Auckland-based Spitfire.

Bevan has a simple message for others wanting to follow in his footsteps.  “If you’re passionate enough about something in life you will find a way to make it happen.  For me it’s flying, owning and displaying Warbirds.  Why dream small?”

With the Chipmunk and Harvard already in his possession, Bevan now has his eyes set on adding a WWII fighter to his collection.  Given his record to date there’s every chance he’ll do just that.
< previous story
next story >