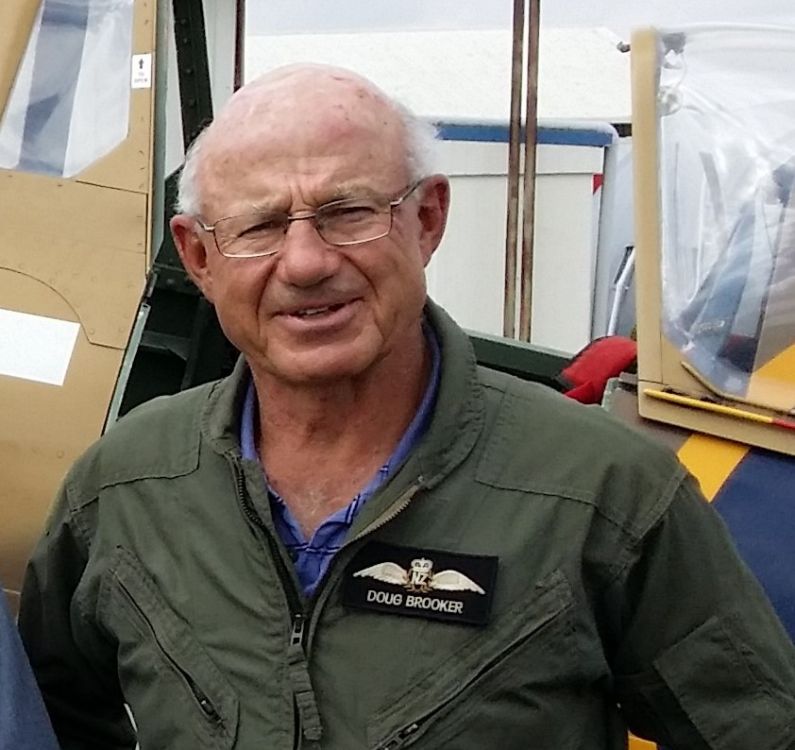 Auckland businessman, Doug Brooker, admits purchasing his one and only Warbird aircraft was an exercise in patience and in the end, determination.

Doug’s love of flying goes back to when he was young living near Ohakea Air Force base.  He recalls attending one airshow where the USAF displayed their F84 Thunderjets.  He still remembers the commentator urging visitors to make sure their car windows were down so they didn’t shatter when the jets broke the sound barrier on their passes.

After getting his PPL at the age of 33 Doug got involved in competitive aerobatics and started displaying at airshows.  Around 2006 Doug was approached about joining a syndicate which was being formed to hopefully buy the Wanaka-based Spitfire, owned by Sir Tim Wallis.  Doug, who had grown up reading Biggles books, said he was keen but unfortunately the deal did not come to pass.

A year on Doug purchased a new aerobatic aircraft kit and had Wal Denholm and his crew at Avspecs in Auckland, build it for him.  The aircraft was in the test flight period when Wal, who knew about Doug’s earlier interest in a Spitfire, asked if he wanted to check out a two-seater which had just become available in Florida.

Doug was keen and did his due diligence on the aircraft, but by the time his interest was registered another buyer, from Australia, had done a deal to buy it.  Unfortunately, the new Australian owner was killed in a flying accident so never got to complete the purchase.  The aircraft came back on the market and this time Doug was successful in buying it.

Now came the job of getting the aircraft back to New Zealand.  It was flown across the United States and then put in a container ready for the trip to Auckland.  However, US authorities were alerted to the export of a “military aircraft” and the bureaucrats got involved.  Doug had to engage lawyers and It took several months, numerous phone calls and reams of paperwork to finally get clearance from high up in the State Department before the aircraft was finally cleared to leave the US.

The only other Warbird Doug has flown apart from the Spitfire, is a Harvard.  He spent some hours with Frank Parker in the Harvard in preparation for flying the Spitfire.

Today Doug enjoys displaying both his aircraft – the Spitfire MH367 and his MXS aerobatic aircraft.  Doug had been engaged to fly both aircraft at Warbirds Over Wanaka 2020 until Covid forced organisers to cancel the Airshow.   Hopefully they can return in 2022.