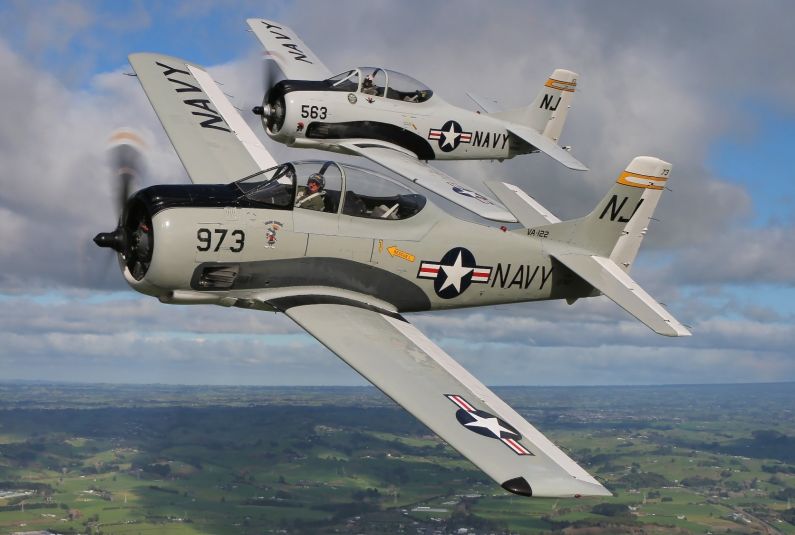 Taranaki businessman and aviator Brett Emeny doesn’t believe you can ever own enough Warbird aircraft.  It’s just a matter of being able to afford to keep adding to your collection.
Brett is one of New Zealand’s leading display pilots and his association with Warbirds Over Wanaka goes back to the early days of the event.

His love of all things aviation began at a young age.  “As kids all our toys seemed to have wings and then at the age of 15 I started flying gliders ending up as an instructor just two years later.”  Today Brett owns a very successful agri-helicopter business with clients around the country.  When he’s not working at his day job he’s usually found working on, or flying, his Warbird collection.

Brett’s first classic aircraft purchase was a share in the T-28 Trojan which he now owns outright.  In 1994 he went to Switzerland to test fly and eventually buy his Vampire jet and along the way he’s added a couple of Yak-52s.  Over the years he has flown many different Warbird aircraft including the Kittyhawk, Mustang, Harvard, Hawker Hunter, L-29, L-39.  Brett is also currently the Chief Pilot for the only airworthy Catalina Flying Boat still in New Zealand.

Brett admits that being able to work on the aircraft himself helps keep the costs down.  “Most of my Warbirds have needed some restoration work when I purchased them and having the ability to do a lot of that work myself, along with help from some amazing certified engineers to keep them flying, has been the difference for me.”

The Emeny name is synonymous with aviation in New Zealand.  Brett’s father Cliff Emeny was a WWII Mosquito fighter bomber pilot, older brother Craig owns Air Chathams while nephew Duane is CEO at Air Chathams.  Brother John is a pilot while yet another brother Derek is an aviation accident assessor.  Finally, Brett’s daughter Faye is a newly-minted member of the Yak-52 aerobatic display team.

Over the years Brett has had plenty of wonderful aviation experiences.  “Helping train so many of the Yak-52 team pilots has been very satisfying.  Our 9-ship display is looking pretty sharp these days and I reckon it would easily stack up against similar teams overseas.  Seeing my daughter Faye become a fully-fledged member of the team earlier this year was also a special moment.”

Brett says landing the Catalina on Lake Wanaka during the lakeside Airshow at Warbirds Over Wanaka still gives him a huge buzz as does being part of the Wanaka Jet Racing which hopefully will make a return in 2022.
< previous story
next story >